While our historic theatre is temporaily closed, The Bobby Stone Film Series presented by West Village at the Tivoli Theatre continues to bring the very best in cinema magic to our friends and community.

This is a new way for audiences to watch new releases from the safety of their homes during this unprecedented time while also supporting the Tivoli Theatre Foundation. We now have streaming movies available for you to enjoy here first!

The Tivoli Theatre is excited to be part of this unique initiative and will keep all our fans updated on the latest movie releases we will offer as part of this exciting new series. More to come soon!

What is a virtual cinema?

A virtual cinema is a new way for audiences to watch our latest releases from the safety of their homes during this unprecedented time while also supporting their local independent theater.

The Tivoli Foundation is excited to welcome writer, actor, director, and producer Barlow Jacobs to the Bobby Stone Film Series for a virtual Q&A to discuss recent Lionsgate release, The Quarry. He sat down with director Scott Teems and co-writer Andrew Brotzman to give us insider details on how the film was made and what makes this project so special. View the conversation below and follow this link to check out the full length feature. 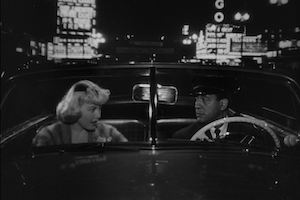 One of the most controversial novels of its day, Richard Wright's Native Son (first published in 1940) exposed the injustices of urban African-American life, witnessed through the eyes of Bigger Thomas, whose violent tendencies and moral confusion were the natural result of a lifetime of deprivation. In prison for murder and sentenced to death, Thomas reflects on the circumstances that led to his fate.

Kino Lorber presents a new restoration of the 1951 film version of the novel, directed by Pierre Chenal and starring Richard Wright as Bigger Thomas. It is presented in association with the Library of Congress, Fernando Martin Peña and Argentina Sono Film. Special thanks to Edgardo Krebs for his years of research into the making of Native Son, and for being a tireless champion of its restoration and re-release. 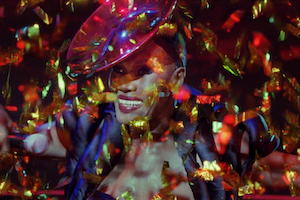 This electrifying journey through the public and private worlds of pop culture mega-icon Grace Jones contrasts musical sequences with intimate personal footage, all the while brimming with Jones’s bold aesthetic. A larger-than-life entertainer, an androgynous glam-pop diva, an unpredictable media presence – Grace Jones is all these things and more. Sophie Fiennes’s documentary goes beyond the traditional music biography, offering a portrait as stylish and unconventional as its subject. Taking us home with her to Jamaica, into the studio with long-time collaborators Sly & Robbie, and backstage at gigs around the world, the film reveals Jones as lover, daughter, mother, and businesswoman. But the stage is the fixed point to which the film returns, with eye-popping performances of "Slave to the Rhythm," “Pull Up to the Bumper,” "Love is the Drug," and more. Jones herself has said watching the film “will be like seeing me almost naked” and, indeed, Fiennes’s treatment is every bit as definition-defying as its subject, untamed by either age or life itself. 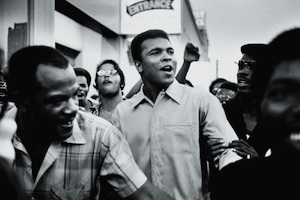 The Trials of Muhammad Ali

No conventional sports documentary, The Trials Of Muhammad Ali investigates its extraordinary and often complex subject's life outside the boxing ring. From joining the controversial Nation of Islam and changing his name from Cassius Clay to Muhammad Ali, to his refusal to serve in the Vietnam War in the name of protesting racial inequality, to his global humanitarian work, Muhammad Ali remains an inspiring and controversial figure. Outspoken and passionate in his beliefs, Ali found himself in the center of America's controversies over race, religion, and war. From Kartemquin Films - makers of such acclaimed documentaries as Hoop Dreams and The Interrupters - and Academy Award-nominated director Bill Siegel (The Weather Underground), The Trials Of Muhammad Ali examines how one of the most celebrated sports champions of the 20th century risked his fame and fortune to follow his faith and conscience. 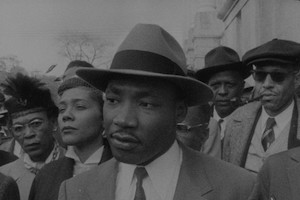 Constructed from a wealth of archival footage, KING: A FILMED RECORD...MONTGOMERY TO MEMPHIS is a monumental documentary that follows Dr. Martin Luther King, Jr. from 1955 to 1968, in his rise from regional activist to world-renowned leader of the Civil Rights movement. Rare footage of King's speeches, protests, and arrests are interspersed with scenes of other high-profile supporters and opponents of the cause, punctuated by heartfelt testimonials by some of Hollywood's biggest stars.

KING was originally presented as a one-night-only special event on March 20, 1970, at an epic length of more than three hours (plus intermission). Since that time, the film has occasionally been circulated in a version shortened by more than an hour. Newly restored by the Library of Congress, in association with Richard Kaplan, and utilizing film elements provided by The Museum of Modern Art, the original version of KING can again be seen in its entirety, mastered in HD from the 35mm preservation negative.

Admitted to the National Film Registry in 1999, KING is a cinematic national treasure that allows viewers to be first-hand witnesses to Dr. King's crusade, and thereby gain a fuller appreciation of both the personal challenges he endured and the vast cultural legacy he left behind. 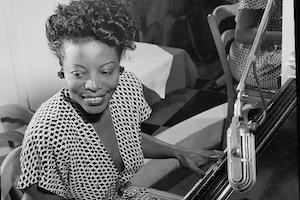 Mary Lou Williams, The Lady Who Swings the Band

She was ahead of her time, a genius. During an era when Jazz was the nation's popular music, Mary Lou Williams was one of its greatest innovators. As both a pianist and composer, she was a font of daring and creativity who helped shape the sound of 20th century America. And like the dynamic, turbulent nation in which she lived, Williams seemed to redefine herself with every passing decade.

From child prodigy to "Boogie-Woogie Queen" to groundbreaking composer to mentoring some of the greatest musicians of all time, Mary Lou Williams never ceased to astound those who heard her play. But away from the piano, Williams was a woman in a "man's world," a black person in a "whites only" society, an ambitious artist who dared to be different, and who struggled against the imperatives of being a "star." Above all, she did not fit the (still) prevailing notions of where genius comes from or what it looks like. Time and again, she pushed back against a world that said, "You can't" and said, "I can." It nearly cost her everything.

Tickets: $10 – This film is provided by our friends at ArtMattan Productions. 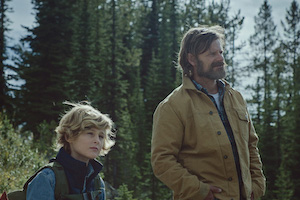 Steve Zahn stars as Troy, a troubled but well-intentioned father who has recently separated from his wife Sally (Jillian Bell). Aghast at Sally's refusal to let their trans son Joe (Sasha Knight) live as his authentic self, Troy runs off with Joe into the Montana wilderness. Meanwhile police detective (Ann Dowd) pursues them, but her resolve about the case is tested the more she learns about Joe's family. COWBOYS, a modern day Western from director Anna Kerrigan, is a tale of rescue, family betrayal and a father and son on the run.

Tickets: $12 - This film is provided by our friends at Samuel Goldwyn Films. 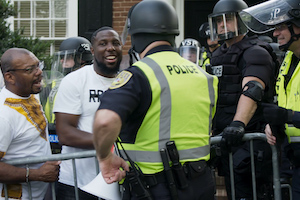 At a time when America is ripping apart at the seams, The Reunited States is a powerful and urgent documentary that follows the unsung heroes on the difficult journey of bridging our political and racial divides. Susan Bro, who lost her daughter when a car drove through a crowd of counter-protestors in Charlottesville, and David and Erin Leaverton, a Republican couple who travel to all fifty states in an RV to find out what divides us, are just a few of the characters profiled in the film. Each of these bridge-builders have realized that while our divides run deeper than they ever could have imagined, so does the love and hope to bring our country back together. Based on the book of the same name by Mark Gerzon, the film urges us to consider that everyone has a role to play in reuniting the country.

Tickets: $10 - This film is provided by our friends at Darkstar Pictures. 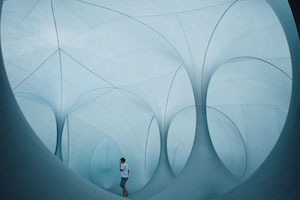 The Reason I Jump

Based on the best-selling book by Naoki Higashida, later translated into English by author David Mitchell (Cloud Atlas), The Reason I Jump is an immersive cinematic exploration of neurodiversity through the experiences of nonspeaking autistic people from around the world. The film blends Higashida's revelatory insights into autism, written when he was just 13, with intimate portraits of five remarkable young people. It opens a window for audiences into an intense and overwhelming, but often joyful, sensory universe.

Moments in the lives of each of the characters are linked by the journey of a young Japanese boy through an epic landscape; narrated passages from Naoki’s writing reflect on what his autism means to him and others, how his perception of the world differs, and why he acts in the way he does: the reason he jumps. The film distills these elements into a sensually rich tapestry that leads us to Naoki’s core message: not being able to speak does not mean there is nothing to say.

Tickets: $12 - This film is provided by our friends at Kino Lorber. 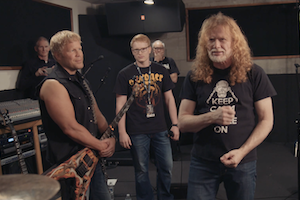 Summer camp meets Spinal Tap as we journey to Rock ‘n’ Roll Fantasy Camp, where dreamers from across America and around the world gather to shred with their heroes - and learn to rock like the legends. Rock Camp is an institution and cultural phenomenon that has been going on in Los Angeles, New York and other cities since 1996. The brainchild of music producer David Fishof, Rock Camp boasts a jaw-dropping array of rock star “counselors” that include Roger Daltrey, Alice Cooper, Paul Stanley and Gene Simmons, Nancy Wilson, Joe Perry, Jeff Beck, Slash and countless other rock legends. The counselors teach, inspire and jam with the campers over the course of four days. Each Rock Camp concludes with all of the counselors and their respective campers, performing together.

Tickets: $12 – This film is provided by our friends at Mad Pix and Cedar Hills Cinema.

All you have to do is click the Rent button, enter your email address and your credit card or PayPal information. That’s it! Once the film is rented, it will be available to view for 30 days and you’ll have 72 hours to finish once you’ve started watching.

Will my rental help the Tivoli Theater Foundation?

Yes! Our partners want to help local independent theaters as much as we can during this period. A portion of the following film rentals and/or purchases will benefit the Tivoli Theater Foundation. Thank you for your support!

You can easily watch on your computer, smartphone, or tablet.

If you have a Google Chromecast, make sure that it’s connected to the Wi-Fi network as the device you used to purchase the film. Then, click in the playback window and select your Google Chromecast. You can also watch on your TV by connecting your computer to the TV using an HDMI cable.

For instructions on how to watch Film Movement titles on your television, mobile device, etc click here for more information.