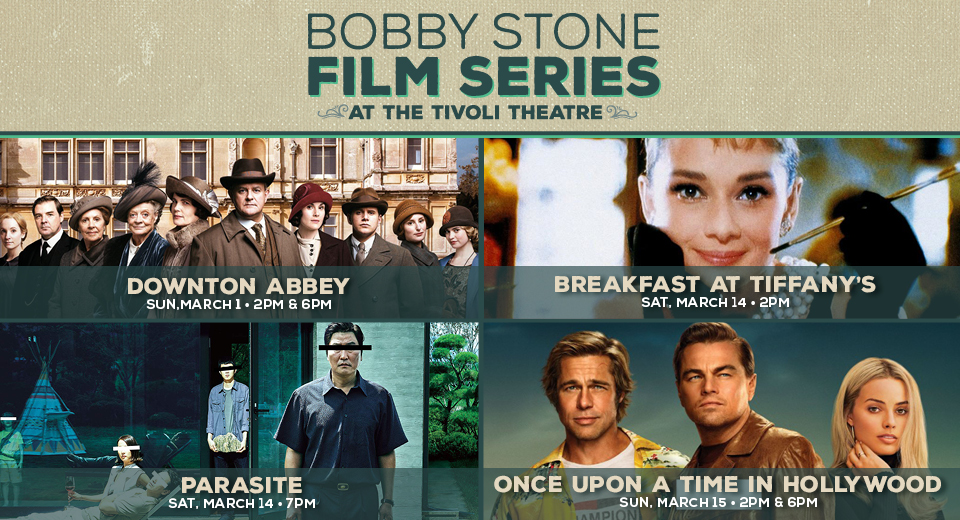 The Tivoli Theatre opened as a movie picture palace in 1921, so it’s only fitting that nearly 100 years later the Tivoli Theatre Foundation continues the tradition with the Bobby Stone Film Series in the historic venue.

We hope you enjoyed our previous lineups, embracing classic films as well as new releases, and family films. The Tivoli Theatre Foundation is proud to build on its recent successful relaunch of films on the largest screen of its type in North America and a brand new, fully digital surround sound system.

Friends of the Tivoli can receive advance notice of screenings and complimentary or discounted tickets, click here to learn more.

The worldwide phenomenon DOWNTON ABBEY, becomes a grand motion picture event, as the beloved Crawleys and their intrepid staff prepare for the most important moment of their lives. A royal visit from the King and Queen of England will unleash scandal, romance and intrigue that will leave the future of Downton hanging in the balance. This movie is 2 hours and 2 minutes long, and rated PG.

A young New York socialite becomes interested in a young man who has moved into her apartment building, but her past threatens to get in the way. Based on the novel by Truman Capote, starring Audrey Hepburn. This movie is one hour and 55 minutes, and is not rated.

Bong Joon Ho brings his work home to Korea in this pitch-black modern fairytale. Meet the Park Family: the picture of aspirational wealth. And the Kim Family, rich in street smarts but not much else. Be it chance or fate, these two houses are brought together and the Kims sense a golden opportunity. Masterminded by college-aged Ki-woo, the Kim children expediently install themselves as tutor and art therapist, to the Parks. Soon, a symbiotic relationship forms between the two families. The Kims provide "indispensable" luxury services while the Parks obliviously bankroll their entire household. When a parasitic interloper threatens the Kims' newfound comfort, a savage, underhanded battle for dominance breaks out, threatening to destroy the fragile ecosystem between the Kims and the Parks. This movie is 132 minutes long, and rated R.

ONCE UPON A TIME IN HOLLYWOOD

Quentin Tarantino's ninth feature film is a story that takes place in Los Angeles in 1969, at the height of hippy Hollywood. The two lead characters are Rick Dalton (Leonardo DiCaprio), former star of a western TV series, and his longtime stunt double Cliff Booth (Brad Pitt). Both are struggling to make it in a Hollywood they don't recognize anymore. But Rick has a very famous next-door neighbor...Sharon Tate. This movie is 159 minutes long, and rated R.