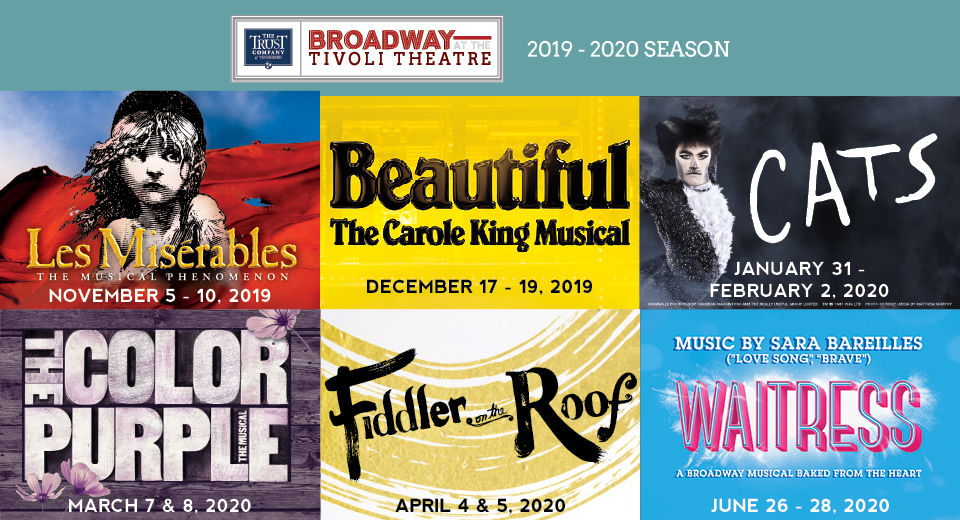 Broadway at the Tivoli

The Tivoli Theatre Foundation is thrilled to once again partner with the Trust Company of Tennessee for another great Broadway season,” says Nick Wilkinson, Executive Director of the Tivoli Theatre Foundation. “For the fourth year in a row, Chattanooga will be home to the very best of Broadway and we are delighted to bring this amazing lineup to the Chattanooga community.”

The complete Trust Company of Tennessee Broadway at the Tivoli Theatre season is as follows:

Subscription packages for the season are on sale now! Purchase online here or at the box office in person or by phone!

Single performance tickets will go on sale at 10am ET on Monday, August 26. If you'd like access to our venue presale, sign up for our newsletter at the top of the page!

The Tivoli offers three package options and subscribers can enjoy all six titles or customize a package of four or five titles. Save 10% when you buy all six titles. As long as you renew your yearly subscription, the seats are yours to keep year to year. Additional subscription benefits include first notification of next year’s season, free same-show ticket exchanges and the opportunity to purchase additional tickets before they go on sale to the general public. Once subscriptions go on sale Monday, you may purchase by calling the Tivoli Theatre box office at 423-757-5580 or by visiting the box office in person at 709 Broad Street, Monday-Friday, 10am–6pm. 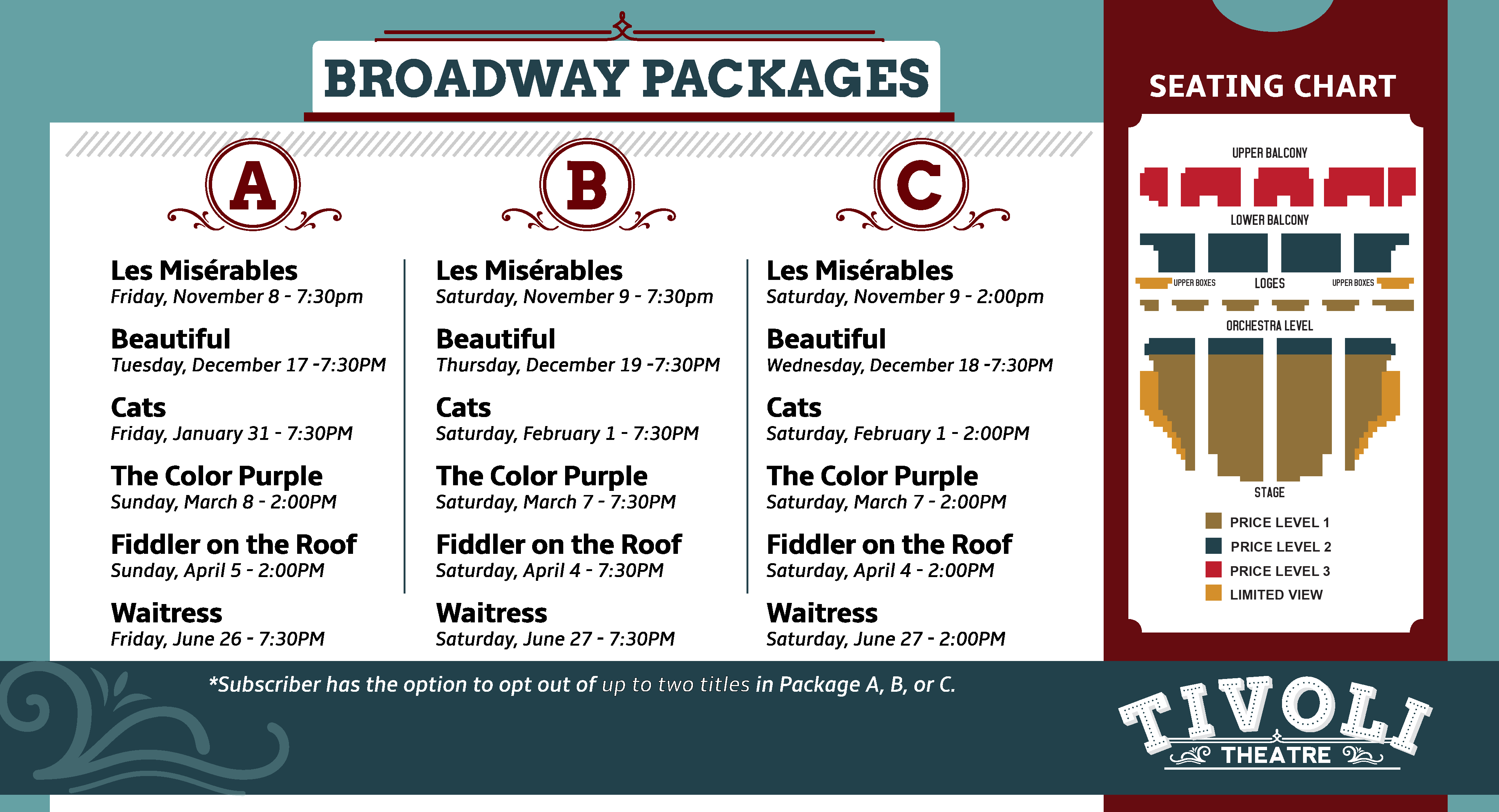 Take your Broadway experience to the next level and become a Friend of the Tivoli!  This membership program gives loyal supporters the opportunity to enjoy exclusive members-only recognition and events, ticket pre-sale opportunities, access to the new 1921 Society Lounge, VIP parking and other unique benefits. In addition to these exciting members-only perks, Friends of the Tivoli contributions are tax-deductible and ensure vibrant theatrical and performing arts at the Tivoli Theatre, Soldiers and Sailors Memorial Auditorium, and the Walker Theatre. To learn more, visit tivolichattanooga.com/friends or contact Nick Wilkinson with the Tivoli Theatre Foundation at 423-432-1888 or emailfriends@tivolichattanooga.com. Donate today at tivolichattanooga.com or by mailing a check to: Friends of the Tivoli, 399 McCallie Avenue, Chattanooga, TN 37402.

The season kicks off with LES MISÉRABLES. Cameron Mackintosh presents the new production of Alain Boublil and Claude-Michel Schönberg’s Tony Award-winning musical phenomenon, LES MISÉRABLES, direct from an acclaimed two-and-a-half-year return to Broadway.  Set against the backdrop of 19th-century France, Les Misérables tells an unforgettable story of heartbreak, passion, and the resilience of the human spirit. Featuring the beloved songs “I Dreamed A Dream,” “On My Own,” “Stars," “Bring Him Home,” “One Day More,” and many more, this epic and uplifting story has become one of the most celebrated musicals in theatrical history. With its glorious new staging and dazzlingly reimagined scenery inspired by the paintings of Victor Hugo, this breathtaking new production has left both audiences and critics awestruck. “Les Miz is born again!” (NY1).

BEAUTIFUL – THE CAROLE KING MUSICAL tells the inspiring true story of King’s remarkable rise to stardom, from being part of a hit songwriting team with her husband Gerry Goffin, to her relationship with fellow writers and best friends Cynthia Weil and Barry Mann, to becoming one of the most successful solo acts in popular music history. Along the way, she made more than beautiful music, she wrote the soundtrack to a generation.

Featuring a stunning array of beloved songs written by Gerry Goffin/Carole King and Barry Mann/Cynthia Weil, including “I Feel The Earth Move,” “One Fine Day,” “(You Make Me Feel Like) A Natural Woman,” “You’ve Got A Friend” and the title song, BEAUTIFUL has a book by and Tony® Award-nominee and Academy® Award-nominated writer Douglas McGrath, direction by Marc Bruni, choreography by Josh Prince, and took home two 2014 Tony® Awards and a 2015 Grammy® Award.

CATS, the record-breaking musical spectacular by Andrew Lloyd Webber that has captivated audiences in over 30 countries and 15 languages, is now on tour across North America!

Audiences and critics alike are rediscovering this beloved musical with breathtaking music, including one of the most treasured songs in musical theater—"Memory”. Winner of 7 Tony Awards® including BEST MUSICAL, CATS tells the story of one magical night when an extraordinary tribe of cats gathers for its annual ball to rejoice and decide which cat will be reborn. The original score by Andrew Lloyd Webber (The Phantom of the Opera, School of Rock, Sunset Boulevard), original scenic and costume design by John Napier (Les Misérables), all-new lighting design by Natasha Katz (Aladdin), all-new sound design by Mick Potter, new choreography by Andy Blankenbuehler (Hamilton) based on the original choreography by Gillian Lynne (Phantom) and direction by Trevor Nunn (Les Misérables) make this production a new CATS for a new generation!

THE COLOR PURPLE is the 2016 Tony Award® winner for Best Musical Revival! Hailed as “a direct hit to the heart” (The Hollywood Reporter), this joyous American classic has conquered Broadway in an all-new "ravishingly reconceived production that is a glory to behold” (The New York Times).

With a soul-raising, Grammy®-winning score of jazz, gospel, ragtime and blues, THE COLOR PURPLE gives an exhilarating new spirit to this Pulitzer Prize-winning story.

Don’t miss this stunning re-imagining of an epic story about a young woman’s journey to love and triumph in the American South. Experience the exhilarating power of this Tony-winning triumph that New York Magazine calls “one of the greatest revivals ever.”

Audiences across North America are toasting a new production of FIDDLER ON THE ROOF! Rich with musical hits you know and love, including "Tradition," "Sunrise, Sunset;' "If I Were A Rich Man;' "Matchmaker, Matchmaker" and "To Life (L'Chaim!)," FIDDLER ON THE ROOF is the heartwarming story of fathers and daughters, husbands and wives, and life, love and laughter.

Tony®-winning director Bartlett Sher and the team behind South Pacific, The King and I and 2017 Tony-winning Best Play Oslo, bring a fresh and authentic vision to this beloved theatrical masterpiece from Tony winner Joseph Stein and Pulitzer Prize winners Jerry Bock and Sheldon Harnick. Featuring a talented cast, lavish orchestra and stunning movement and dance from Israeli choreographer Hofesh Shechter, based on the original staging by Jerome Robbins, FIDDLER ON THE ROOF will introduce a new generation to the uplifting celebration that raises its cup to joy! To love! To life!

Meet Jenna, a WAITRESS and expert pie-maker who dreams of a way out of her small town and rocky marriage. Pouring her heart into her pies, she crafts desserts that mirror her topsy-turvy life such as “The Key (Lime) to Happiness Pie” and “Betrayed By My Eggs Pie.” When a baking contest in a nearby county — and a satisfying run-in with someone new — show Jenna a chance at a fresh start, she must find the courage to seize it. Change is on the menu, as long as Jenna can write her own perfectly personal recipe for happiness.