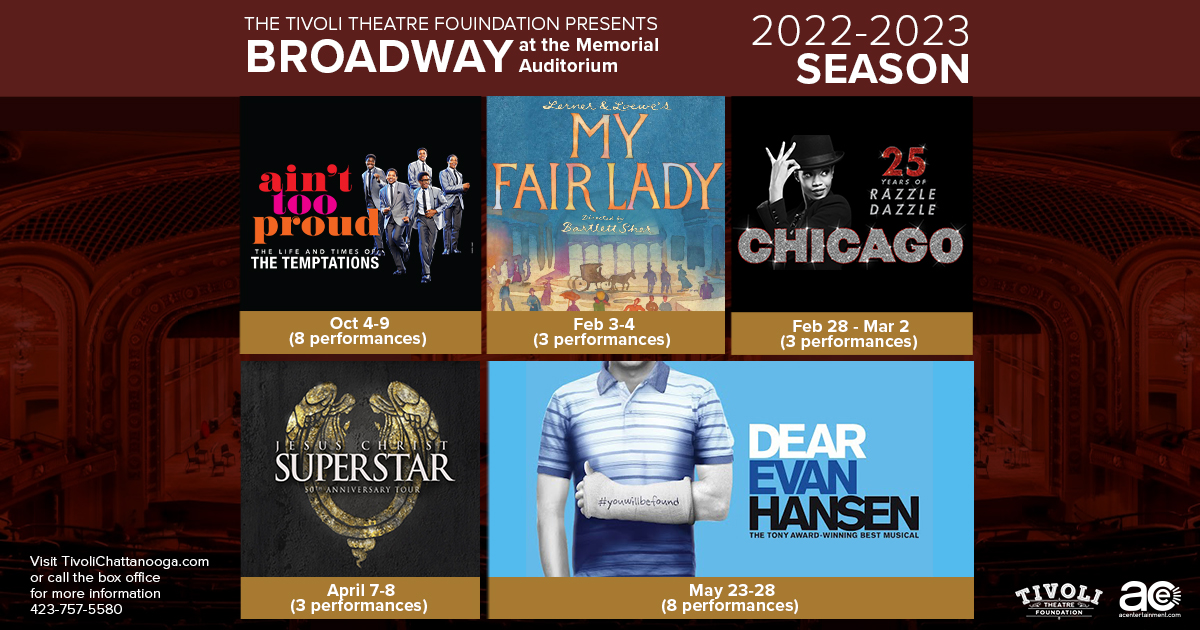 The complete 2022-2023 Broadway at the Memorial Auditorium season is as follows:

Season subscriptions are on sale now!

The Foundation offers three package options that include all 5 titles. As long as you renew your yearly subscription, the seats are yours to keep year to year. Additional subscription benefits include first notification of next year’s season, free same-show ticket exchanges and the opportunity to purchase additional tickets before they go on sale to the general public. You may purchase by calling the box office at 423-757-5580, visiting us at the Memorial Auditorium box office from 10am to 2pm M-F throughout the subscription renewal period, or following the links below.

CLICK HERE to renew your current subscription (instructions on how to pay your invoice HERE).

*FIDDLER ON THE ROOF is only available for single performance ticket purchases. This engagement is not part of the 2022-2023 season subscription packages. 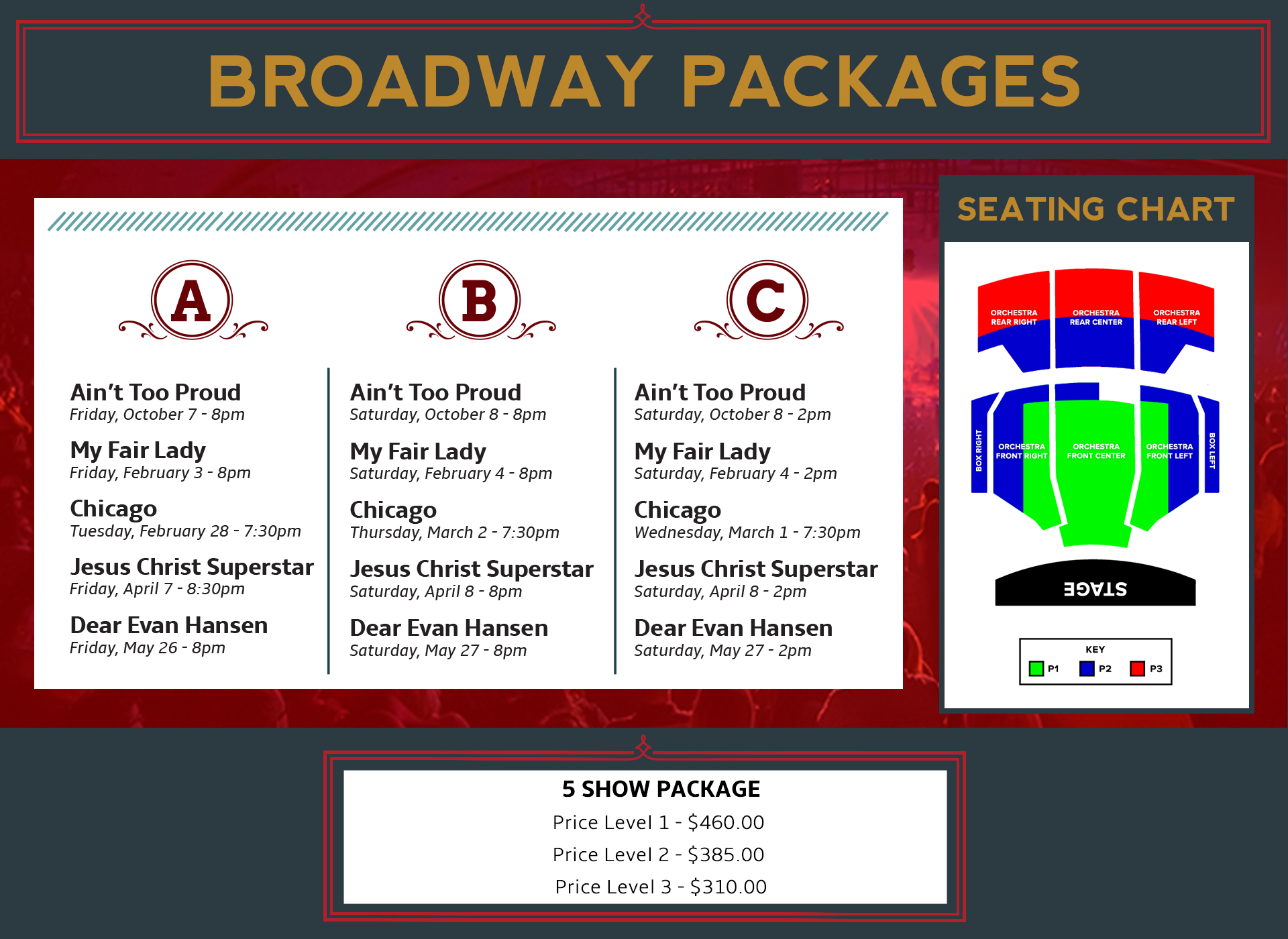 AIN’T TOO PROUD: THE LIFE AND TIMES OF THE TEMPTATIONS is the electrifying new smash-hit Broadway musical that follows The Temptations’ extraordinary journey from the streets of Detroit to the Rock & Roll Hall of Fame. Nominated for 12 Tony® Awards and the winner of the 2019 Tony Award for Best Choreography, it’s a thrilling story of brotherhood, family, loyalty, and betrayal during a decade of civil unrest in America. Set to the beat of the group’s treasured hits, including “My Girl,” “Just My Imagination,” “Get Ready,” and “Papa Was a Rolling Stone,” AIN’T TOO PROUD tells the unforgettable story of the legendary quintet that Billboard Magazine named the greatest R&B group of all time.

From Lincoln Center Theater comes “a sumptuous new production of the most perfect musical of all time” (Entertainment Weekly), Lerner & Loewe’s MY FAIR LADY. Director Bartlett Sher’s glowing production is “thrilling, glorious and better than it ever was” (New York Times). Boasting such classic songs as “I Could Have Danced All Night,” “The Rain in Spain,” “Wouldn’t It Be Loverly” and “On the Street Where You Live,” MY FAIR LADY tells the story of Eliza Doolittle, a young Cockney flower seller, and Henry Higgins, a linguistics professor who is determined to transform her into his idea of a “proper lady.” But who is really being transformed?

After 25 years, CHICAGO is still the one musical with everything that makes Broadway shimmy-shake: a universal tale of fame, fortune, and all that jazz, with one show stopping song after another and the most astonishing dancing you’ve ever seen. No wonder CHICAGO has been honored with 6 Tony Awards®, 2 Olivier Awards, a Grammy®, and thousands of standing ovations. As we celebrate our 25th anniversary, you’ve got to come see why the name on everyone’s lips is still…CHICAGO.

With lyrics and music by Tim Rice and Andrew Lloyd Webber, this musical theater classic is set against the backdrop of an extraordinary series of events during the final weeks in the life of Jesus Christ as seen through the eyes of Judas. Appealing to both theater audiences and concert music fans alike, this production pays tribute to the historic 1971 Billboard Album of the Year while creating a modern, theatrical world that is uniquely fresh and inspiring.

Winner of 6 Tony Awards® including Best Musical and the Grammy Award for Best Musical Theatre Album, DEAR EVAN HANSEN is the deeply personal and profoundly contemporary musical about life and the way we live it. The Washington Post calls DEAR EVAN HANSEN “Theatrical magic. One of the most remarkable shows in musical theater history.”